Something For The Weekend: Fri 19 – Sun 21 September

1. Going with the Flow

Flow Salford is a weekend of the vast, the varied and the very new performance art being made in Salford, a city famous for its rich history of creativity.

A diverse range of Salford’s newest talent take up residency across the city in an exciting mix of cult and brand new venues including The Lowry Studio, The Kings Arms, The Working Class Movement Library and Salford Arts Theatre.

Flow Salford is a chance for locals and visitors alike to discover new talent in Salford. See the next big comedian in your community venue, be surprised by something new in The Lowry Studio and find some family fun in your local pub.

It’s here from tomorrow, and it’s going to be superb.

Behind the Mask, the biggest collection of BAFTA-winning actor portraiture ever assembled, comes to The Lowry for its first time out of London.

Gotts spoke exclusively to The Lowry earlier this week, and told us not only about the skill of his craft, but also some pretty tasty gossip about photographing inside Al Pacino’s house and visiting George Clooney in Lake Como!

The exhibition is completely free (though we do ask you generous people for donations), so why not come down from Saturday and have a poke about… before visiting neighbouring exhibition Here’s One We Made Earlier then coming to see either of our last two War Horse performances? 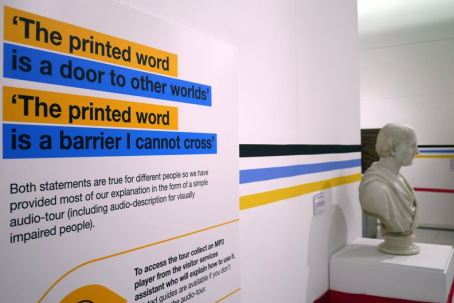 One Man’s Vision mark’s the 175th anniversary of the creation of the Society, and shows how attitudes and services for visually impaired people.

The first ‘asylum’ for blind people was set up in the late 1700s and soon similar charities emerged, providing meaningful employment for those who had previously been marginalised.

Henshaws itself was opened in 837.

And it has been specifically designed with the needs of people with a visual impairment in mind.

It’s completely free, and tomorrow is opening day. At weekend’s you can visit between noon and 4pm, and on weekdays the hours are 10.00 to 16.45. Why not pop over and take a look!