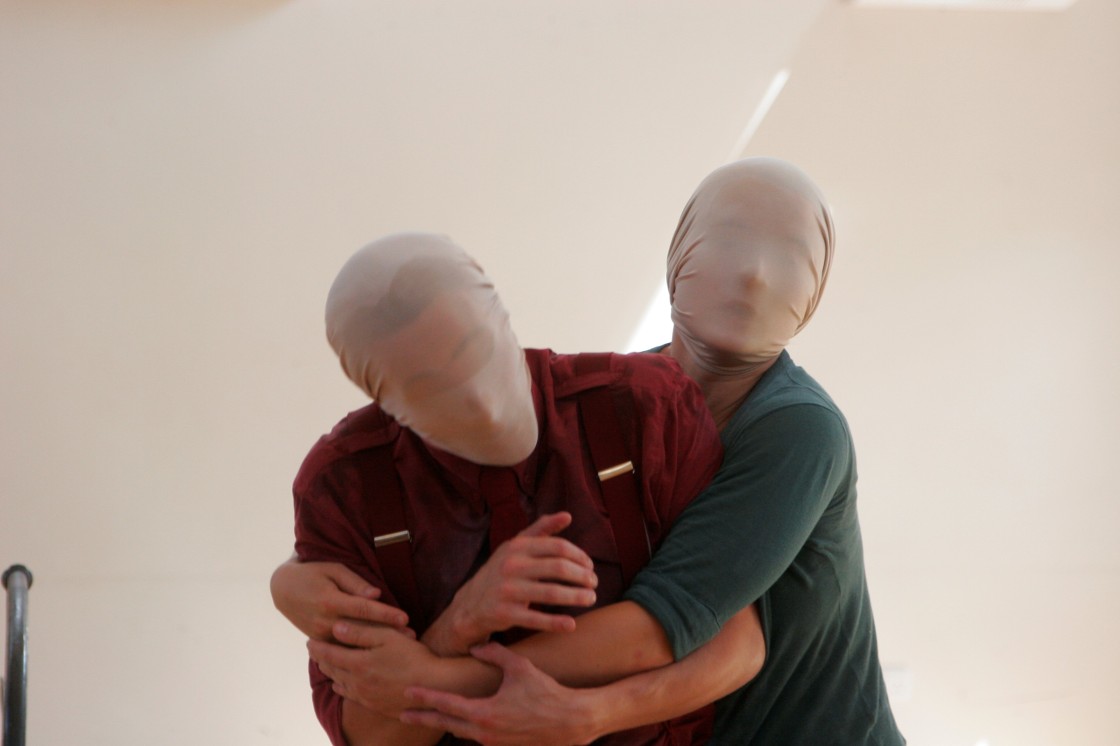 We are Theatre Re and we are very much looking forward to bringing our new piece Blind Man’s Song to The Lowry in September.

We are an international ensemble-led company based in London and we have been making work on the edge of mime and theatre since 2009.

We started thinking about Blind Man’s Song in June 2013 and we opened in January 2015 as part of the London International Mime Festival. So it has been quite a journey!

It all began with a painting by Renée Magritte entitled The Lovers and a mystery: why do the lovers, in the act of kissing, have their faces veiled?

Some suggested: because they are concealing something about themselves and it was the start of the most extravagant opinions on what it was that they were hiding from our view.

But could we not imagine that the presence of the veil is there to lead the observer to a completely different world, a world above reality for instance (after all The Lovers is a surrealistic painting).

In that world could we not ask, what is the veil revealing rather than concealing?

What does it say about the lovers, about that kiss and why do they kiss?

We realised that in the act of kissing most people choose to close their eyes. Darkness unlocks the doors of imagination and arouse the wildest and most mysterious sides of our minds. This was going to become our world above reality: the world inside. And our main character became a blind musician who has never seen the light. It is his world that we set out to explore and another key questions came into the mix: what does it mean to live in a world with no sight?

To find answers, we engaged a meaningful dialogue with the blind members of the Haringey Phoenix Group in North London. Through regular interviews, discussions and feedback sessions from January 2014 to January 2015, we collected information and material that helped us build the piece. We also worked in collaboration with VocalEyes, in order to make the result of our explorations accessible to the people who helped us shape the piece.

In the end Blind Man’s Song is an intimate, moving and very visual, musical and physical piece of theatre. It seems to trigger a wide range of different emotions, ideas and even memories. We try to reach to the level of the unconscious.

If you come we promise to take you on a dreamlike journey travelling at the speed of memory to a place where some things become more visible in the dark.

See you in September!

Guillaume Pigé on behalf of Theatre Re