We catch-up with Salford-born actress Emma Lowndes who is heading back to her home city to play the role of Shakespeare’s daughter ‘Susanna Hall’ in drama The Herbal Bed at The Lowry. Emma was most recently seen on television in the award-winning ITV1 drama Downton Abbey in which she played ‘Mrs Drewe’ – the farmer’s wife who secretly took in Lady Edith Crawley’s baby daughter Marigold. 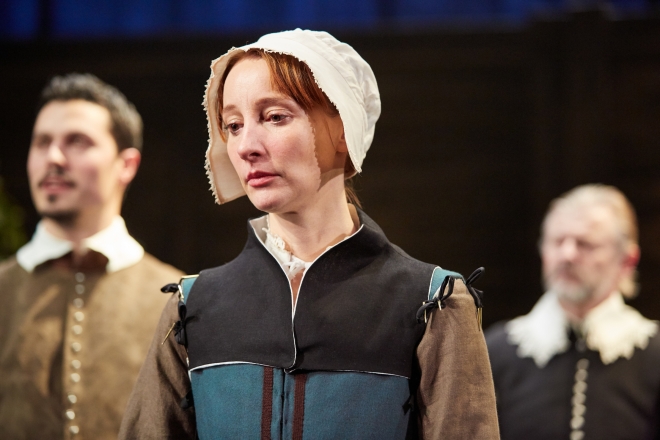 Can you tell us what The Herbal Bed is all about?

The Herbal Bed tells the story of the Hall family in Stratford Upon Avon and centres around Susanna Hall; Shakespeare’s eldest daughter. It is an imagining of the events that fell before, during and after an accusation of adultery with her neighbour.

I think it’s interesting how gossip is as damaging today, especially with the invention of social media where everyone has an opinion. In Jacobean Stratford everyone in the town would have known each other and gossip was far reaching, especially for someone with a famous family. It could have spread as far as London and had terrible consequences. Susanna is ahead of her time. Her gravestone pays tribute to her kind spirit and her famous cordials, which she would concoct. In those days women were overlooked and so this was an unusual honour and says something about her character. Today women are still fighting for equal rights and equal pay and job opportunities. The fight goes on.

How important is it to mark the 400th anniversary of Shakespeare’s death?

We wouldn’t be celebrating Shakespeare’s anniversary if he wasn’t still having an enormous impact upon theatre goers and readers. For me, he is one of history’s finest philosophers, with an understanding of human nature that holds up a mirror to our deepest thoughts and feelings without judging. And he does this via the energy and poetry of his beautiful verse and prose.

You previously acted in another of Peter Whelan’s plays, The Accrington Pals, what is it that makes his writing so special?

Peter manages to deal with massive themes and high drama within the intimacy of a domestic setting. His language is bold and poetic; a real nod to the great writers which must have influenced him. He also writes so well for women and you can feel his admiration and respect for them on the page, no matter what their complexities.

Why should people come see The Herbal Bed?

This play appears to be a domestic drama about love, but cleverly spirals into a thrilling courtroom drama. Hopefully something for everyone to enjoy!