Opening night in Plymouth ahead of musical arrival at The Lowry 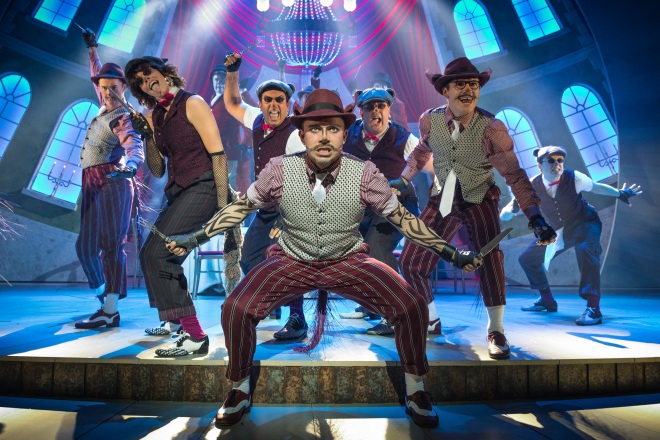 The Wind In The Willows has been a household treasure for well over 100 years now – whether that be in form of the original novel, the 1987 or 1995 film – or even the TV series. Fast forward to the present day – and a new musical has been born in the shape of Kenneth Grahame’s work, produced by Jamie Hendry Productions. We went down to their official opening night in Plymouth to check out the show and chat to the cast before they arrive here at The Lowry.

This brand new musical is Julian Fellowes and music and lyrics by George Stiles and Anthony Drewe, the creative team behind Mary Poppins and the recent hit Half a Sixpence. The musical duo effortlessly create refreshing melodies and catchy lyrics – to the point where you’ll probably be singing the songs even when you get home! We spoke to Rufus Hound post-show, and he spoke of his love for Stiles and Drewe’s music:

“It’s timeless. That’s the thing I loved about Stiles and Drewe’s music from the first moment I heard any of it, is there are numbers in this that could’ve been written in any musical era – all at different times, there are songs and songs and songs in this that just feel like a big warm hug. And I say that as someone who has to sing them!”

Jamie Hendry and his creative team have still maintained that essence of the Edwardian era in which it was written, and it’s nice to see that they didn’t feel the need to over-modernise the famous novel. The set, which seems simple at first, is brought to life with dozens of amazing props, which we got the chance to see backstage earlier on in the day, and it really sets the scene for the classic British narrative. From some angles, the set really does give you the feel of a pop-up book, or even a fish-eye effect which makes it feel not quite real. Speaking to AKA Account Manager David Fearns backstage before the evening performance, he commented that it took them TWELVE trucks to get the set from one place to another. Incredible, right?

The costumes are simple, yet creative enough to reinforce the idea, that they are indeed animals. We’re introduced to the good guy team of Ratty (Thomas Howes), Mole (Fra Fee), Badger (David Birrell) and Mrs Otter (Sophia Nomvete) who determinedly try to help out the reckless Toad (Rufus Hound) from getting up to no good in his car. Hound is astoundingly brilliant in his role, and really proves himself as the star of the show.

But if you thought Toad was the reckless one, we meet Chief Weasel (Neil McDermott) and his gang of ‘Wild Wooders’, who are determined to take what isn’t theirs. McDermott really does this character justice, managing to take sneaky and sly to a whole new level. But when sneaky and sly was quite enough, we were given snippets of fun and cuteness with the other woodland animals, such as the singing family of hedgehogs – which definitely made our night and just about everyone else’s!